This is the new blog...CONFESSION ZERO

I AM NOT AFRAID (the final post on this blog)

*English translation of the video
Open [+/-]

I am not afraid.

I am not afraid if in the turmoils of these conspicuous times I will be accused of conspiracy.

I am not afraid to be accused of stirring unrest, but you cannot deny that I am a mother; not only the mother of "Tandis & Baran" [refering to her daughter Baran Kowsari], but also the mother of all that youth who has been witnessing their own mothers through the windows of my films; mother of "Touba", "Gilaneh", "Forough", "Narges", "Seema" and ... [names of female protagonists of her films]

I am the mother of all those who have opened their homes to me; who have told me their suppressed pains of years, such that I can depict their life sufferings on film.

Out of respect for the trust of all my audience, I feel entitled to the right of seek justice for all these mothers who, in the chaos of this crisis, are helpless and vulnerable, either having lost their children, or frantically and frightened seek the missing ones in the four corners of the city. [I feel entitled] to writing this open letter to say that no law, no concern, and no politics justify the pain they are suffering.

In a condition that no media is there to report the truth and no official takes the responsibility of helping the killer anxiety of these parents, how can we not tremble on every rumor of the torture of killing of a young son or daughter?

*And here is a translation of her first public statement on this matter:
Open [+/-]

We are documentary filmmakers.

Our job is to uncover and express truth. expressing truth from several points of view. In the events of the past few days, by hiding reality, the national media is making it impossible for the members of the society to have access to the reality.

We are documentary filmmakers, our job is communication.

Iranian national TV belongs to the whole of the country and is obliged to reflect the opinions and the events of society, hence it must not be the mouth peace of a specific faction and exclude a large portion of the society.

We are documentary filmmakers, and our job is art, committed to culture and the language of our country. Reporting language has to be the guardian of the dignity of the nation. By censoring, spinning and using an inappropriate reporting languahe, the national TV has on the one hand, made lying a norm in the society, and on the other uses disrespectful language against people and in so doing provokes people into chaos and revolt.

We warn you that at the current inflamed situation, depriving the society from ability from peaceful expression of their demands draws the society into violent reactions in people who prior to election were expressing their opinions on their favorite candidates, peacefully side by side.

We warn that these actions [of the national TV, Seda o Seema] lead to violence and unrest and makes them liable for any massacre and chaos in the society and endangers a country that if guaranteed of justice, can reach a true national unity.

We are a people of thousand years of history. We are all together, we all share the history of this land.
Don't break us apart!
June 16, 2009
Translated from http://www.youtube.com/watch?v=_2VFBWRJfAQ


~thepoetryman's ode, The Sword of Damocles, to the Iranian people~

The demoralizing phantom holding the cudgel can strike us
Like a rapist would, or screech like an injured swine,
Or reflect our disgraced and beaten will, as the ghouls have.
The vapors cannot cleave from our hearts our children’s dawn
Or their passion, tendered willingly as falling rain from heaven,
Like Gibran’s silver thread’s fetching them laughter in front of misery.

They are the heirs, the warriors to lift Damocles’ blade from the sky and
Mightily point it as proof they’ll not breathe another minute next to fear.
They will evermore admonish the failing ghosts of this day’s shadow
And fend off the hounds of cruelty with the strength they’ve resurrected.
There will be no reason to shrink from this; their destiny; they’ve seen her
Floating over their heads, grace and harmony hanging by a thread.

Tip of my hat to Naj
for her wonderful post on
Mrs Rakshan Bani-Etemad...

On June 7th, 2008 Sarah Palin interrupted her schedule of state business and spent Alaska state taxpayer money to fly down from Juneau to the Mat-Su Valley where she attended on June 8th two religious events dominated by the Wasilla Assembly of God, which is demonstrably Palin's key Alaska church.

At the end of one those events, young adults in a church Palin had attended for over two decades were presented with Samurai swords. "Warriors of old were considered undressed if they were without their sword... Swords were worn in service to the lord of the realm. Some of the most renounced swordsmen were the Samurai," intoned a church member officiating the sword ceremony, who then quoted Psalms 149 verses 6-9:
"May the praise of God be in their mouths and a double edged sword in their hands to inflict vengeance on the nations, and punishment on the peoples, and to bind their kings with fetters, their nobles with shackles of iron, and to carry out the sentence written against them."

Better to have given them truth
to plunge inside their own empty spirit... 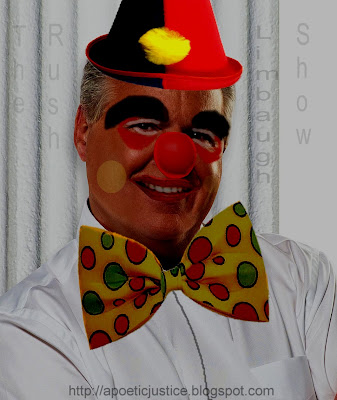 O! From the foul wind blowing over America
Comes this; a most colossal whore’s voice
Screeching another miserably worn-out minute!

The irony of his deception belies an ignoble aim
Leaving fools ready to lop off someone’s head
As the mythic shit-stain spews forth tired claims.

He is no one’s god but his sheep. No precision
Within his words, just fuel for agitation
For a weak-willed herd of unconscious ovine.

Let us not mistake his voice, his words for courage or fact;
Let us bend his insensitive language into the brave light
And watch the drip, drip, drip of uncontrolled lies retract.

O he is most foul and undoubtedly in need of an outfit;
A tall hat, bow tie, long shoes, red nose and a wig;
So, what he says is seen for what it is- a load of shit!

In association with
BEN HEINE ART 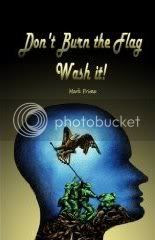 This web site contains copyrighted material the use of which has not always been specifically authorized by the copyright owner. We are making such material available in our efforts to advance understanding of environmental, political, human rights, economic, democracy, scientific, and social justice issues, etc. We believe this constitutes a 'fair use' of any such copyrighted material as provided for in section 107 of the US Copyright Law. In accordance with Title 17 U.S.C. Section 107, the material on this site is distributed without profit to those who have expressed a prior interest in receiving the included information for research and educational purposes.For more information go to: www.law.cornell.edu If you wish to use copyrighted material from this site for purposes of your own that go beyond 'fair use', you must obtain permission from the copyright owner.