This is the new blog...CONFESSION ZERO 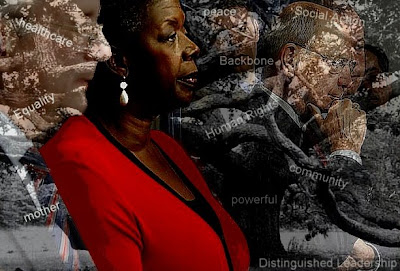 Democratic U.S. Rep. Stephanie Tubbs Jones, the first black woman to represent in Congress and a strong critic of the war, died Wednesday after a brain hemorrhage. (More...)

Stephanie was a “…fearless friend and unyielding advocate…” Barack Obama.

They gazed in awe at the black oak tree
standing tall above their many ashen faces.

She smiled upon them with lustrous teeth;
a majestic peace formed of its own will.

In the day she offered them her shade,
in the evenings,
the soothing light of her moon.

The warm curve of her skin embraced them,
spoke with them,
arcing her limbs in benevolent dance.

When the people would fix their eyes upon her
she kindly offered mother, sister, friend
and her grace touched them, as it does now,
in their search for an equally dazzling poem…

In association with
BEN HEINE ART

This web site contains copyrighted material the use of which has not always been specifically authorized by the copyright owner. We are making such material available in our efforts to advance understanding of environmental, political, human rights, economic, democracy, scientific, and social justice issues, etc. We believe this constitutes a 'fair use' of any such copyrighted material as provided for in section 107 of the US Copyright Law. In accordance with Title 17 U.S.C. Section 107, the material on this site is distributed without profit to those who have expressed a prior interest in receiving the included information for research and educational purposes.For more information go to: www.law.cornell.edu If you wish to use copyrighted material from this site for purposes of your own that go beyond 'fair use', you must obtain permission from the copyright owner.